“The SUP for a PUP Street Fair was a Huge Success!” 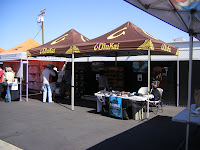 Held on a sunny Saturday in Newport Beach, California, filled with music, tons of product raffles, fresh food from Wahoo's, great deals on great gear, and some of the finest four-legged friends eager for adoption, SUP for a PUP proved to be a very successful event that not only raised critical funds for AWFA, but also established new homes for the 20 abandoned dogs that were onsite. With the goal of raising substantial funding through SUP for a PUP, local surf and sports apparel companies came together to host a super-sized one-day sample sale with a huge selection of Kaenon Polarized, Hinano Clothing, Surftech Surfboards & Stand Up Paddle Boards, Surfline, Stand Up Journal, Pro Bar, Lara Bar and of course OluKai Premium footwear. Each of the participating companies donated a significant portion of their proceeds to AWFA, and with a local raffle the collective reached over $7000. "Our local beach community really stepped up for the inaugural SUP for a PUP event," said event creator Chris Wyman of Kaenon Polarized. "From the beginning, our goal with SUP for a PUP was to not only raise awareness of the problem, but to ultimately find new homes for some of these really great dogs. Which is precisely what we accomplished," said Wyman.

SUP FOR A PUP - THE FACTS: Even though the event is over, (donations and requests for dogs are still coming in) so far a total of 20 dogs found loving homes and we raised over $7000 from the event through donations and sales from proceeds from the company's involved, customer donations, raffle tickets and adoptions.
Walk Stories Feb 02, 2023

How to Pack for Golf Trips: Proven Strategies from a Top Golfer

Looking for the best excursions, tours by locals, and things to...